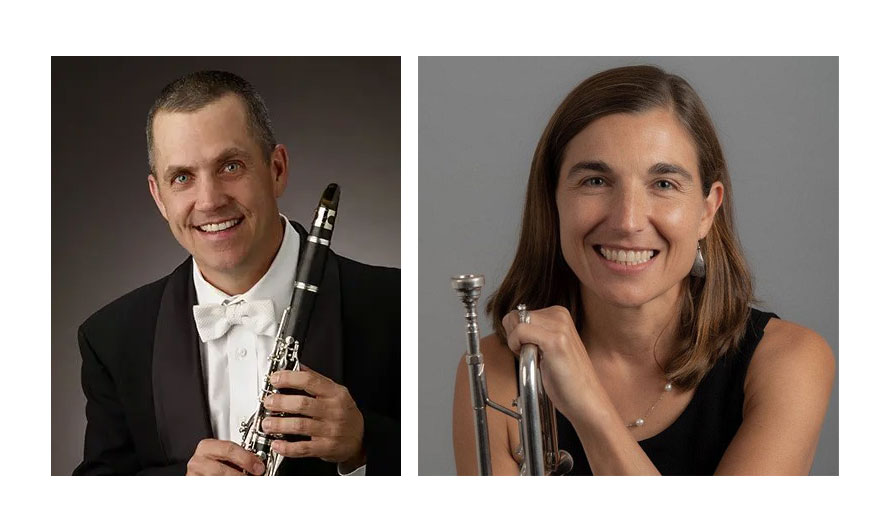 RRCMS board members Amanda Bekeny and Daniel McKelway have gathered friends from The Cleveland Orchestra and the freelance community for an amazing evening of music!

Amanda Bekeny discovered her passion for orchestral and chamber music at The College of Wooster as a young trumpet student of her longtime mentor and friend, composer Dr. Jack Gallagher. Following her time at Wooster, Dr. Bekeny spent years of intense study in trumpet, orchestral performance, and chamber music. She holds a Master’s degree in Trumpet Performance from the University of Wisconsin-Madison, where she was a student of John Aley and Alan Campbell and was a member of the renowned Wisconsin Brass Quintet. She earned her Doctor of Musical Arts Degree in Trumpet Performance from The Ohio State University, where, as a student of Timothy Leasure, she was awarded the A. Peter Costanza Award for the most Distinguished DMA Document. After completing her graduate degrees, she continued to develop her interest in chamber music at the San Francisco Conservatory of Music as a student of David Burkhart and member of the acclaimed New Music Ensemble, a group formerly led by composer John Adams and passionately directed by Nicole Paiement.

An active performer, Dr. Bekeny is a member of the City Music Cleveland Chamber Orchestra, Firelands Symphony, Diamond Brass and the Olympic Brass Quintet. Dr. Bekeny can regularly be heard playing with the Akron Symphony and is a former member of the Ashland Symphony, Mansfield Symphony, and Ohio Light Opera Orchestra.

Daniel McKelway began playing the clarinet at the age of eight. His early teachers were Alan Ware and Thomas Cameron, principal clarinetists of the Charlotte Symphony. While a student of his principal teacher, Robert Listokin, at the North Carolina School of the Arts (NCSA), McKelway won the Arts Recognition and Talent Search sponsored by the National Foundation for Advancement in the Arts, the NCSA concerto competition, and his biggest prize, the Young Concert Artists Audition in 1984. McKelway received both a Bachelor of Music and an Artist Diploma from the New England Conservatory where he studied with the late Harold Wright, principal clarinetist of the Boston Symphony. While in Boston, McKelway won prizes at the Naumberg and Affiliate Artists Competitions, and in 1989 he was awarded an Avery Fisher Career Grant.

In 1994, McKelway began his orchestral career spending one year as principal clarinetist with the Grand Rapids Symphony before being appointed, in May 1995, by Christoph von Dohnanyi as assistant principal and Eb clarinetist of The Cleveland Orchestra. McKelway has served on the faculties of the Longy School in Boston, the Bowdoin Festival, Hope College in Michigan, the NCSA and the Kent/Blossom Music Festival.

At this point in time, all pews in West Shore Church will be used and the decision to wear a mask will be a personal one. There will be both a live audience, and live streaming for those at home. Donations are always welcome. For further information email us at info@rrcms.org, or follow RRCMS on Facebook, Twitter and Instagram.