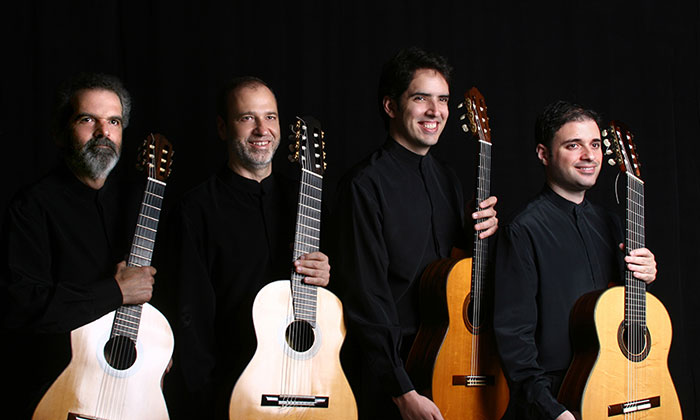 Formed in 1998, the Quartet has established itself as one of the world’s leading classical guitar ensembles as shown by its achievement of “best classical album” at the 2011 Latin Grammy Awards. The Quartet’s discography includes six CDs for the Delos label.

During its nearly 20 years of activity, the Brazilian Guitar quartet has performed throughout the Americas, Europe, and Asia, receiving ecstatic audience responses in sold-out halls and garnering rave reviews. Praised by the Washington Post for its “seductive beauty” and “virtuosic gusto,” the Quartet is known for its unique combination of regular six-string and extended eight-string guitars, thereby allowing for the exploration of unusual repertoire. In its Rocky River appearance, the Quartet will begin with Spanish music by Manuel de Falla, Enrique Granados, and Isaac Albeniz; it will end with Brazilian music by Heitor Villa-Lobos, Camargo Guarnieri, and Francisco Mignone.

The members of the Brazilian Guitar Quartet are Everton Gloeden, Tadeu do Amaral, Luiz Mantovani, and Gustavo Costa. All are Brazilian musicians and the latter two, in addition to their performance careers, also teach classical guitar at Brazilian universities. The Quartet is dedicated to interpreting the repertoire for four guitars and to making transcriptions of works from diverse periods and styles, with a heavy emphasis on Brazilian and Spanish music.