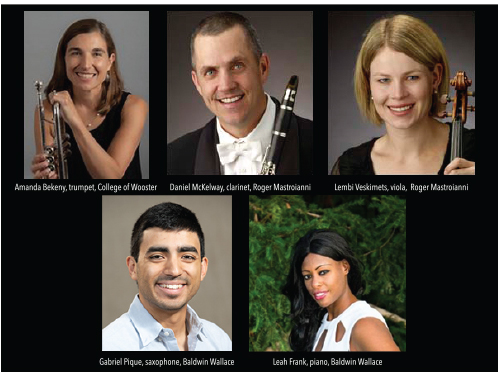 Chamber Music in the Pandemic

Due to the current coronavirus pandemic, we have had to postpone our April 20 concert and move it to Monday, May 18 at 7:15 pm. Also due to the pandemic, our original artists are unable to perform this concert. Instead, Rocky River Chamber Music Society and West Shore Unitarian Universalist Church will collaborate in presenting five local artists, including two members of The Cleveland Orchestra, Cleveland Freelancers, and faculty members from Baldwin Wallace University. The music to be performed will include works by Max Bruch, Paul Creston, Henry Purcell, Joseph Turrin, and Vittorio Monti.

About the Artists
Trumpeter Amanda Bekeny is a member of City Music Cleveland, Firelands Symphony, and is a faculty member of The College of Wooster.

Clarinetist Daniel McKelway is a member of The Cleveland Orchestra and faculty member of the Baldwin Wallace Conservatory.

Violist Lembi Veskimets is a member of The Cleveland Orchestra and faculty member of the Baldwin Wallace Conservatory.

Pianist Leah Frank is a staff pianist at Baldwin Wallace Conservatory and a Master’s Degree student at the Cleveland Institute of Music.

This concert will begin on May 18 at 7:30 pm and will be a live streamed event with the stream starting at 7:15pm. There will be two ways to access it (in Facebook and YouTube) on the evening of the concert:
1.) Facebook: https://facebook.com/WestShoreUU
2.) YouTube: https://m.youtube.com/channel/UCjwSxK8LLlIKw6LeMviMK7g

The Rocky River Chamber Music Society is committed to providing this concert of classical music to our loyal Northeast Ohio audience via streaming. Unlike all of our past concerts there will be no audience. Instead, you will be able to enjoy this concert at home in the comfort of a favorite armchair. Please keep checking Facebook, Twitter, and our website for further information. If you have additional questions you can email us at info@rrcms.org. If you wish to make a contribution, click here.

We look forward to the return of normal times, recognizing that may be a while. Meanwhile, the Rocky River Chamber Music Society remains firmly dedicated to our policy of presenting concerts to Northeast Ohio audiences at no admission charge. All are welcome.

Bela Kovacs wrote is a series of nine short etudes, each an “Hommage” to a specific composer and written in the style of that composer. Though not originally intended as “concert” pieces, that is exactly what they have become and they are now part of the standard solo clarinet repertoire. Listeners will have no trouble hearing “Bach” in tonight’s performance.

Caprice, one of the many popular compositions of Joseph Turrin, is a “rondo” – ABA’CA’’BA’’’ – with each return of the rondo theme modified in a unique way. Written for Derick Smith, conductor of the Salvation Army’s New York staff band, Derick, with Turrin as pianist, planned to record it. No longer able to meet the technical demands, Derek suggested his son Philip, then a student as a replacement. Thus Philip Smith and Joseph Turrin began a life-long musical relationship that continued through Philip’s tenure as principal trumpet (!) with the New York Philharmonic.

In spite of his relatively short life, Henry Purcell is rightly regarded as the greatest English composer of the Baroque and, certainly, one of the greatest of any era. He wrote music for almost every genre, sacred and secular, vocal and instrumental. This trumpet sonata illustrates his absorption of dominant Italian style, especially in this case, the trio sonatas of Corelli. The sonata follows the fast-slow-fast pattern, with the trumpet resting in the slow movement. Published in 1694, the use of the trumpet probably indicates a celebration of some sort, although its exact purpose is unknown.

Max Bruch composed Eight Pieces for Clarinet, Viola, and Piano, Op. 83 in 1909, for his son Max Felix, a talented clarinetist. Bruch intended that the Eight Pieces be regarded as a set of independent miniatures of various styles rather than as an integrated cycle, and advised against playing all of them together in concert. The clarinet and viola are evenly matched, whether together in duet or engaged in dialogue. Jean-Marie Paul writes,

Each of the eight pieces has its particular charm. Written in a late but conservative Romantic style . . . . . they are much more than short miniatures for the salon. Deep, intense, passionate, and intimate, this music requires talented chamber musicians who understand each other . . . .

Such is the case tonight!

This Sonata was composed in 1939, shortly after Creston firmly committed himself to a career writing music. As was then somewhat common in America, Creston labels the movements with “common-sense English(!)” each title accurately describing the character of that particular movement. “With vigor” unfolds with rhythmic energy – short, pointed rhythmic figures, balanced with long legato lines. “With tranquility” is, in fact, a song – a song “sung” by the saxophone. The D major finale is a fitting ending to the piece. It is strong and decisive with a central episode marked “smooth” perfectly exhibiting the lyrical character of the saxophone and temporarily slowing things down a bit.

This specific piece is by Italian composer Vittorioa Monti, but in general “Csárdás” is a traditional Hungarian national dance in two movements, one slow and the other fast. Originally written for violin and piano, Monti’s piece has been transcribed for a variety of other instrument and serves as a “show-off” piece for any instrumentalist who has the “chops” to pull it off! This arrangement for alto sax faithfully reproduces the original and Gabriel Pique definitely has the “chops!” It is great fun to listen to, so enjoy!