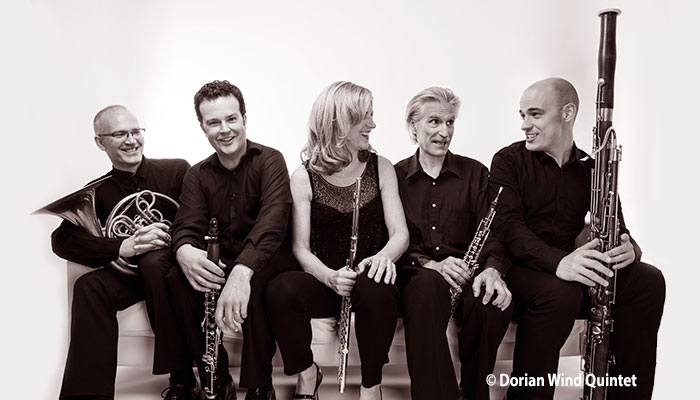 Rocky River Chamber Music Society is thrilled to present America’s premier woodwind quintet in the newly renovated sanctuary at West Shore Unitarian Universalist Church, 20401 Hilliard Boulevard, Rocky River. Formed at Tanglewood in 1961, the Quintet has collaborated with numerous well-known artists such as Phyllis Curtin, Lukas Foss, Claude Frank, Jean-Pierre Rampal, and Cleveland’s Spencer Myer. The London Times has called the Quintet “breathtaking,” and “Time Magazine” has characterized it as “one of chamber music’s most sparkling and eloquent ensembles.”

The current members of the 56-year-old quintet are Gretchen Pusch, flute; Gerard Reuter, oboe; Benjamin Fingland, clarinet; Adrian Morejon, bassoon; and Karl Kremer-Johansen, horn. They are each associated with other prominent performing ensembles, venues, and musical institutions. The Dorian Quintet has literally concertized around the world and made history in 1981 as the first wind quintet to perform at Carnegie Hall. During 2017, they have performed in Connecticut, New York, New Jersey, Mexico, and Ohio.

The Dorian Wind Quintet has commissioned nearly 40 new works of 20th and 21st century wind music from such major composers as Luciano Berio, Joan Tower, and George Perle. One of their latest commissions was Suite for Wind Quintet by Amanda Harberg, which will be played at the Rocky River concert, along with music by Bach and Dvorak. The group has recorded on the Vox, CRI, Serenus, New World, and Summit Records labels.