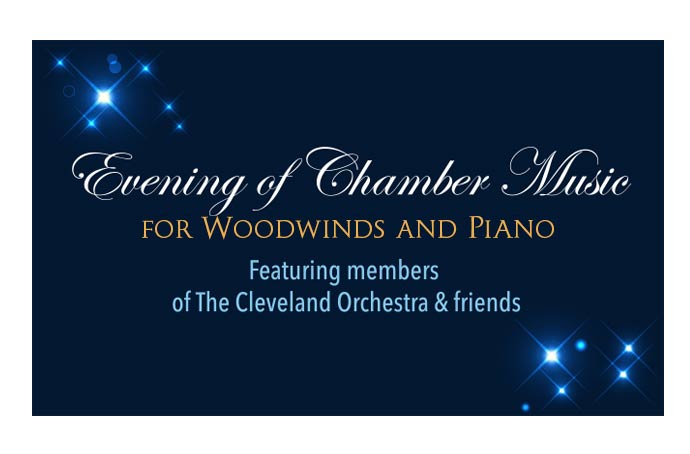 (members of The Cleveland Orchestra and friends)

The Rocky River Chamber Music Society will present the last concert of its 62nd season at 7:30pm on Monday evening, May 17, 2021. Next season we hope to be presenting concerts that are both virtual and that have a live audience in our fabulous acoustical environment at West Shore Unitarian Universalist Church. Meanwhile, this season will close with an evening of chamber music for woodwinds and piano in the usual virtual format. We are most grateful for your support and we thank you for bearing with us for over a year. Here are the links for the May 17th concert:

The players who will be performing at the May 17th virtual concert are avid chamber musicians.
Except for pianist Christina Dahl, all are members of The Cleveland Orchestra. We are especially grateful for the support and encouragement of all the members of The Cleveland Orchestra who played with the Rocky River Chamber Music Society this season. Read below about the fantastic musicians who will be performing on May 17th.

Mary Kay Fink joined The Cleveland Orchestra in 1990 as piccoloist and later also as flutist. In 2014, The Orchestra commissioned for her a piccolo concerto by Gabriela Frank. In addition to appearing as soloist with The Orchestra she has also performed as soloist with Milwaukee Symphony, New Jersey Symphony, The Chicago Philharmonic, and the Ohio Chamber Orchestra. Fink has a Bachelor of Music from Oberlin College Conservatory of Music and a Master of Music degree from The Juilliard School. She gives flute and piccolo master classes at colleges and universities throughout the United States.

Robert Woolfrey joined the clarinet section of The Cleveland Orchestra in November 2008. Prior to his appointment he served as principal clarinet of the Memphis Symphony Orchestra. Many of Robert’s performances have been heard on National Public Radio’s Performance Today. He has served as coach of The Cleveland Orchestra Youth Orchestra and is on the faculty of the Kent/Blossom Summer Music Festival. As an alumnus of the New World Symphony in Miami Beach, Florida he has performed as the soloist for Nielson’s “Clarinet Concerto.” Robert Woolfrey has received music degrees at the University of Toronto and at Yale University.

Richard King currently serves as fourth horn of The Cleveland Orchestra. He joined the ensemble in 1988, and held the position of principal horn from 1997-2015. King has appeared dozens of times as soloist with The Cleveland Orchestra as well as with the Tokyo Symphony and New Zealand’s Auckland Symphony. Since 1985, King has performed as a founding member of Center City Brass Quintet since 1985. The Quintet’s six recordings have been met with critical acclaim. Richard King has conducted master classes all around the United States, Europe and Asia. He has been a member of the Cleveland Institute of Music faculty since 1995.

Barrick Stees became assistant principal bassoon of The Cleveland Orchestra in 2001. He is also instructor of bassoon at the Cleveland Institute of Music and Kent/Blossom Music Festival. He received a Bachelor’s degree and performer’s certificate from the Eastman School of Music. Stees was previously principal bassoonist with the Hartford Symphony, and has played with the Detroit and Pittsburgh Symphonies as well as the Los Angeles Philharmonic. He has concertized throughout the world including Europe, South America, and Asia. Former students of Stees occupy prominent positions in orchestras and universities throughout the United States.

Christina Dahl is a chamber musician, soloist, and teacher who has been on the piano faculty at Stony Brook University for twenty-six years. She has been a visiting faculty member at the Cleveland Institute of Music, Peabody Conservatory, and Ithaca College. Twice she has been a cultural ambassador for the U.S. State Dept. and is in frequent demand as a master class teacher. Her work with Gilbert Kalish at Stony Brook crafts a graduate program for pianists that emphasizes collaboration, immersion in new music, and a comprehensive performance outlook that has yielded a staggering number of successful pianists.

In this its 62nd season, the Rocky River Chamber Music Society remains more firmly committed than ever to presenting concerts to Northeast Ohio audiences at no admission charge. All are welcome. For further information email us at info@rrcms.org .