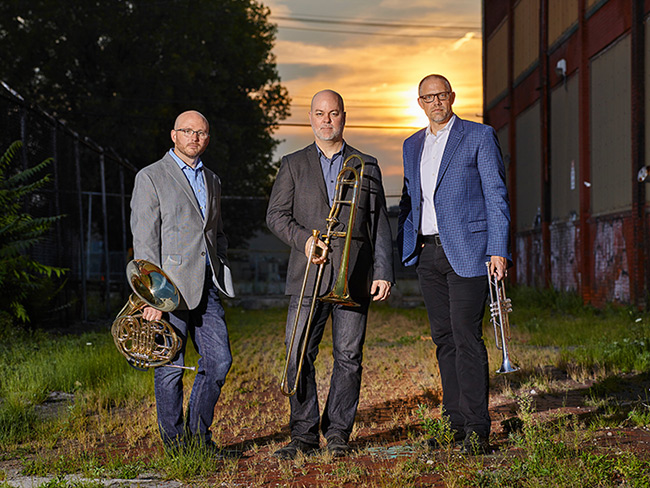 After presenting the Brazilian Guitar Quartet in October and Les Délices in November, Rocky River Chamber Music Society returns in February with not one, but two concerts! Both concerts will take place in the outstanding acoustical environment of the sanctuary at West Shore Unitarian Universalist Church, 20401 Hilliard Boulevard in Rocky River.

The Society’s first concert in 2017 will be its biennial children’s concert to be held on Saturday morning, February 18 at 11:00 a.m. Performing artists will be The Cleveland Orchestra’s second chair brass players, an ensemble with the playful title, “Factory Seconds Brass Trio.” This interactive children’s concert will feature French composer Francis Poulenc’s Sonata for Horn, Trumpet, and Trombone, and will also include storytelling, audience participation, and artwork–perhaps by members of the audience!

The following Monday, February 20 at 7:30 p.m., Factory Seconds Brass Trio will perform an adult concert featuring works by Bach, Hindemith, and Nelhybel. The program will also include the world premiere of a work for brass by contemporary classical music composer David Loeb. At both concerts the musicians of Factory Seconds Brass Trio will be Jack Sutte, trumpet; Jesse McCormick, horn; and Richard Stout, trombone.

In addition to holding the second chair positions in their respective brass sections of The Cleveland Orchestra, all three musicians are on the faculty of Baldwin Wallace Conservatory of Music. Founded in 2012, Factory Seconds Brass Trio has performed locally, regionally and nationally in a variety of settings. Their depth of experience and broad repertoire ranging from Early Music to 20th and 21st century music brings a distinctive voice into brass chamber music.