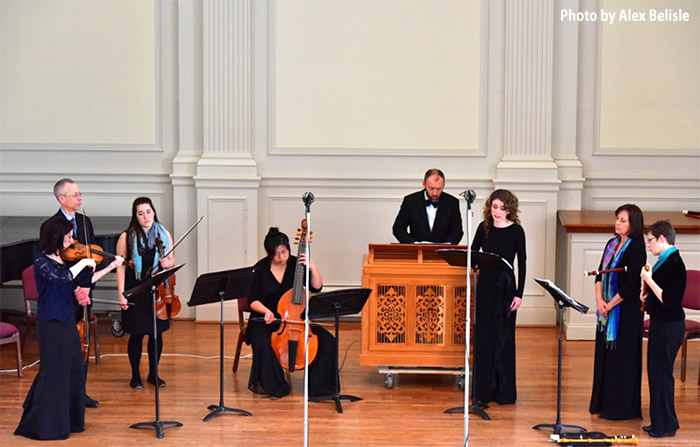 Rocky River Chamber Music Society presents Les Délices in the second concert of its 58th season on Monday, November 7, at 7:30 p.m. at West Shore Unitarian Universalist Church, 20401 Hilliard Blvd. in Rocky River. Founded in Cleveland in 2009 by Baroque oboist Deborah Nagy, Les Délices explores the drama and emotional resonance of long-forgotten music, especially of the French Baroque. The ensemble, composed of artists with national reputations, performs across the United States as well as locally.

For its Rocky River appearance, Les Délices has entitled its program “Caractères de la Danse.” This program will explore dance from its social roots in the ballroom to the distinctive, highly expressive music written for prima ballerinas at the 17th century court of Louis XIV. In fact, it was the Sun King himself who created the world’s first ballet school and engaged outstanding composers of the day such as Rameau, Boismortier, and Rebel, some of whose works will be heard at the November 7 concert.

Musicians who will comprise the ensemble appearing in Rocky River include Deborah Nagy (Baroque oboe, direction), Julie Andrijeski (Baroque violin), Jaap Ter Linden (viola da gamba), and Simon Martyn-Ellis (theorbo & Baroque guitar). Les Délices has released two CD recordings, and its debut CD was named one of the “Top Ten Early Music Discoveries of 2009” by NPR’s “Harmonia.” The ensemble anticipates the release of its third CD in 2017. The New York Times has described Les Délices concerts as “thematically concise and richly expressive….” The Times continued, “Concerts and recordings of Les Délices are journeys of discovery.”