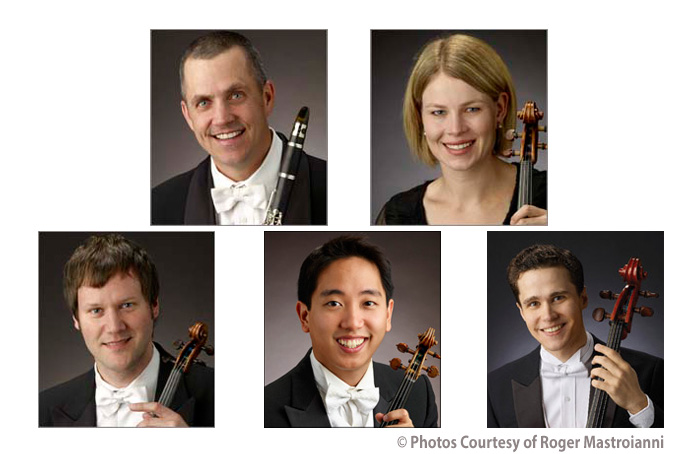 A stellar group of Cleveland Orchestra musicians will be gathering together to perform a concert of chamber music by the ever-ingenious Wolfgang Amadeus Mozart on December 7, at 7:30 p.m. Mozart’s works to be performed are his String Quartet No. 19 in C major, and his Clarinet Quintet in A major. Due to the ongoing pandemic, this will be a virtual concert performed by five artists in the outstanding acoustical environment of West Shore Unitarian Universalist Church. The audience will be at home viewing and listening to the concert on either Facebook Live or YouTube. Access to the concert will be obtained by using one of the following links shortly before the beginning of the concert on December 7 at 7:30 p.m.:

Two of the musicians are residents of Rocky River and one of them is on the board of the Rocky River Chamber Music Society. Daniel McKelway and Lembi Veskimets have enriched the community of Rocky River in many ways. Daniel McKelway joined The Cleveland Orchestra in 1995 as Assistant Principal and E-flat clarinet. He began playing the clarinet at the age of eight and has been performing ever since as a soloist and chamber musician. His orchestral career began in 1994 when he spent one year with the Grand Rapids Symphony, and the following year joined The Cleveland Orchestra. Mr. McKelway has performed in over forty states and twelve foreign countries. Lembi Veskimets became a member of The Cleveland Orchestra’s viola section in 1997. As an enthusiastic chamber musician, she has performed in venues from Carnegie Hall to Cité de la Musique in Paris, and to the Expo in Osaka, Japan. She is a graduate of the Cleveland Institute of Music, and performs in the public schools as an artist-teacher in The Cleveland Orchestra’s Learning Through Music program.

Peter Otto joined The Cleveland Orchestra as first associate concertmaster in September 2007. Before coming to Cleveland, he played in the first violin section of the Saint Louis Symphony Orchestra. He holds a bachelor of music degree from the Hochschule für Musik und Theater in Rostock, Germany, and a master of music degree from the Juilliard School in New York. Peter Otto enjoys a multi-faceted career as a soloist, chamber musician, orchestra musician, and teacher. His intellectual curiosity and passion for the connection of music, philosophy, and mathematics have led to a profound appreciation of complex musical styles.

Before becoming a member of the second violin section of The Cleveland Orchestra in April 2013, Yun-Ting Lee was a member of Canton Symphony Orchestra and CityMusic Cleveland. He also performed as a substitute violinist with the Cincinnati Symphony Orchestra. A native of Taiwan, Mr. Lee grew up in Arizona, and holds bachelor and master degrees in music from the Cleveland Institute of Music, where he received the Bennett Levine Memorial Award in Chamber Music.

Dane Johansen performed as a soloist and chamber musician around the world, and in March 2016, he joined The Cleveland Orchestra. A native of Fairbanks, Alaska, Mr. Johansen studied at the Cleveland Institute of Music, and earned his artist diploma at the Juilliard School. For many years, Dane Johansen explored Johann Sebastian Bach’s Six Suites for Solo Cello. He performed them at Alice Tully Hall in New York, and throughout his 580-mile pilgrimage along the Camino de Santiago in Northern Spain in 2014. This journey became a documentary film called Strangers on the Earth.

In this its 62nd season, the Rocky River Chamber Music Society remains firmly committed to the presentation of concerts for Northeast Ohio audiences, whether virtual or in person. Donations are always welcome. For further information email us at info@rrcms.org, or follow RRCMS on Facebook and Twitter.