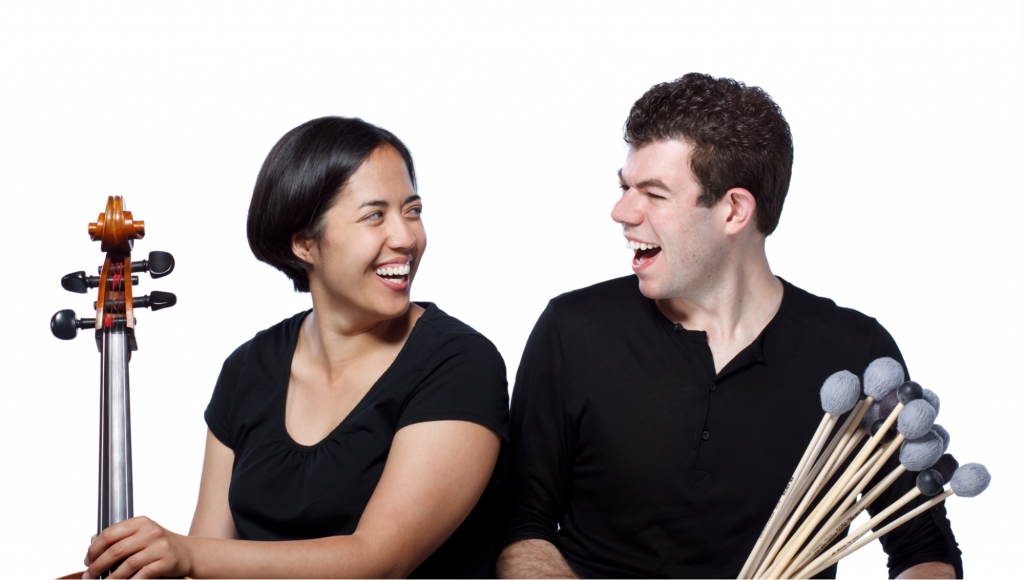 New Morse Code (Hannah Collins, cello; Michael Compitello, percussion) is the confluence of two magnetic personalities who have taken up the admirable task of creating a hub for the performance, commissioning, and promotion of new music. NMC is theoretically the alluring and uncommon combination of cello and percussion, but in practice is best described as two musicians of extraordinary depth and skill untethered by their instrumental constraints. This unrestricted approach has allowed them to create a body of work in which Hannah can be found crushing plastic bottles and Michael plucking the strings of the cello––all with the intention of expanding and facilitating the imaginations of their composer-collaborators––while ultimately creating a meaningful and lasting repertoire. The performances that arise from this playful and innovative methodology reveal Hannah and Michael’s passion for sharing the work of their friends and peers, and aside from their effortless ability to perform the most finger-twisting of contemporary repertoire, NMC’s ability to communicate the esoteric details and depth of these complex works is what makes them truly remarkable chamber musicians. As tireless advocates for new music, they constantly seek out diverse venues (wineries, outdoor parks, art museums, elementary school classrooms), and their ability to connect with disparate audiences by way of their disarming charm, accessible intellect, and dynamic musicality is exceptional.

Hannah and Michael formed New Morse Code while they were students at Yale after returning to the United States from extended and informative study in Europe. Inspired by their similar yet different experiences abroad, they began performing together and planting the seeds that would blossom into their dedicated community of collaborators and followers. Hannah teaches at the University of Kansas and Michael teaches at Arizona State University. They currently serve as assistant directors of Avaloch Farm Music Institute.

New Morse Code’s 2017 debut album Simplicity Itself on New Focus Recordings was described by icareifyoulisten.com as “an ebullient passage through pieces that each showcase the duo’s clarity of artistic vision and their near-perfect synchronicity,” while Q2 Music called the album “a flag of genuineness raised.” Their projects have received support from Chamber Music America and New Music USA. In 2019 they released the title suite of Matthew Barnson’s portrait album, Vanitas, on innova recordings and collaborated with Eliza Bagg, Lee Dionne, and andPlay on and all the days were purple, Alex Weiser’s Pulitzer Prize-finalist work on Cantaloupe music. In 2020, they released EPs of Thomas Kotcheff’s then and then and then this and George Lam’s The Emigrants and were named Grand Prize winners of the Ariel Avant Impact Performance Competition.

At this point in time, all pews in West Shore Church will be used and the decision to wear a mask will be a personal one. There will be both a live audience, and live streaming for those at home. Donations are always welcome. For further information email us at info@rrcms.org, or follow RRCMS on Facebook, Twitter and Instagram.