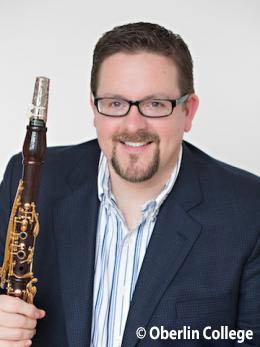 With great excitement the Rocky River Chamber Music Society announces that it will be returning to its home at West Shore Unitarian Universalist Church for its third concert on February 28 at 7:30 p.m. There will be both a live audience and live streaming. Masks will be required as soon as there is entry into the building.

Clarinetist and educator from Oberlin College Conservatory, Richard Hawkins, will be setting the scene for the evening. He and faculty friends from Oberlin will showcase the contrasting styles of wind music with piano and strings. Altogether seven musicians will be involved including the shorter works of Franz Schreker and Michael Kibbe, and the longer work, Sextet in C major, by Hungarian composer Ernὄ Dohnányi. The Sextet is well known in Cleveland’s musical circles since Ernὄ Dohnányi was the grandfather of The Cleveland Orchestra’s sixth music director, Christoph von Dohnányi. As one might surmise, all six players will take part in the Sextet in C major.

The seven artists that will be performing at the concert on February 28 all have a connection with Oberlin College Conservatory. All have been having extraordinary careers. The Icelandic violinist, Sibbi Bernhardsson, joined the Oberlin Conservatory in 2017, after spending the past 17 years with the Pacifica Quartet. He appeared on 16 recordings with the Pacifica Quartet, and has appeared world-wide with many well-known artists including the Guarneri and Cleveland Quartets. Kirsten Doctor, viola, is currently Associate Professor of Viola and Chamber Music at Oberlin Conservatory. For 23 years before that, she was an award-winning member of the Cavani String Quartet, which performed on such stages as Carnegie Hall, Alice Tully Hall, and the Kennedy Center in Washington DC. In 1992, clarinetist Richard Hawkins made his debut with the Kennedy Center and the National Symphony Orchestra and Mstislav Rostropovich. Hawkins is known for his work in teaching, contemporary, chamber, and orchestral music. He joined the faculty of Oberlin Conservatory in 2001, and in addition to his performance career pursues his passion for advancing the history of woodwind instrument design.

James Howsmon, piano, has collaborated with more than 1,000 recitals in North America, Europe, and Japan, and has performed with principal players of every major American orchestra. Howsmon oversees the instrumental collaborative activities of the school’s 100 piano majors. He is also Professor of Instrumental Accompanying at Oberlin, and is a frequent performer on its stages. Cellist Dmitry Kouzov, is a first prize winner at the International Beethoven Competition in the Czech Republic. Born in St. Petersburg, Russia, Dmitry began cello lessons at the age of seven and currently is Associate Professor of Cello at Oberlin Conservatory. Kouzov’s most recent recordings have included music for violin and cello by Eisler, Widman, and Ravel. Drew Pattison, bassoon, studied at Oberlin and is now on the faculty teaching. He has held principal positions with the Elgin and Lake Forest Symphonies. Previous to Oberlin, he taught bassoon at DePaul University. Associate Professor Jeff Scott served as the horn player in the Oberlin-founded Amani Winds for more than 20 years. He performed numerous times with the Jazz at Lincoln Center Orchestra, under the direction of Wynton Marsalis.

The Rocky River Chamber Music Society is extremely grateful to both West Shore Unitarian Universalist Church, and to Lakewood Congregational Church for helping to make it possible, in many different ways, to stay alive during the most difficult times of the pandemic.

In this its 63rd season, the Rocky River Chamber Music Society remains firmly committed to the presentation of concerts for Northeast Ohio audiences, whether virtual or in person. Donations are always welcome. For further information email us at info@rrcms.org, or follow RRCMS on Facebook and Twitter.