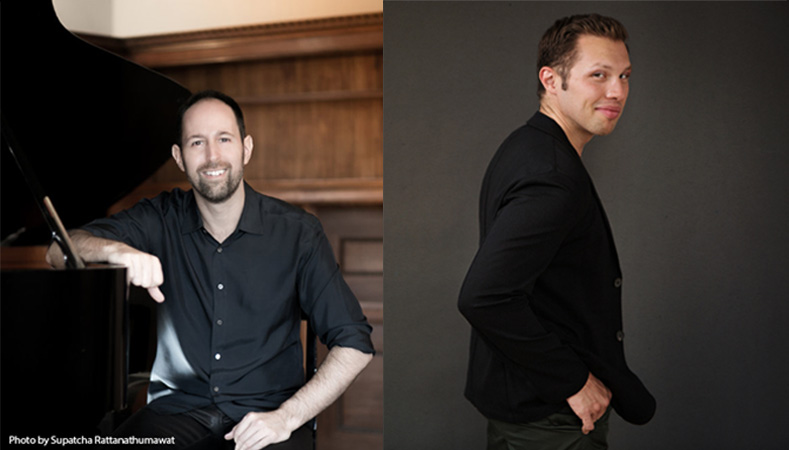 The Rocky River Chamber Music Society is thrilled to welcome back Spencer Myer, piano and Mario Diaz-Moresco, baritone for an evening of art song and solo piano on Monday, March 9 at 7:30 p.m. at West Shore Unitarian Universalist Church, 20401 Hilliard Boulevard in Rocky River. Their program will feature works by Beethoven, Debussy, Barber, and Bolcom.

An enthusiastic supporter of the education of young musicians, Spencer Myer is well known to northeast Ohio audiences. He studied at Oberlin College Conservatory and The Juilliard School, and received his Doctor of Musical Arts degree from Stony Brook University in 2005. He has served on the faculties of conservatories at Baldwin Wallace University and Oberlin College. Since his time in Ohio, Spencer Myer has become known as one of the most important American artists of his generation, having reaped critical acclaim from around the world. He has won many international prizes and competitions and has numerous recordings including Bolcom, Piano Rags; and Brahms, Sonatas for Cello and Piano with Brian Thornton.

Mario Diaz-Moresco has performed across the country, often with Spencer Myer. He is active on both recital and operatic stages and has garnered praise for his comic flair and resonant baritone voice. Diaz-Moresco has been a Young Artist with Chautauqua Opera, Central City Opera, The Glimmerglass Festival, and a Vocal Fellow at the Ravinia Stearns Music Institute. In addition to his studies in Colorado and Southern California, Mario Diaz-Moresco recently completed the Professional Studies Diploma program at Mannes School of Music in New York City.

Early arrival at this concert is highly recommended. The Rocky River Chamber Music Society remains firmly committed to presenting concerts to Northeast Ohio audiences at no admission charge. All are welcome. For further information call 440-333-4296 or email us at info@rrcms.org.