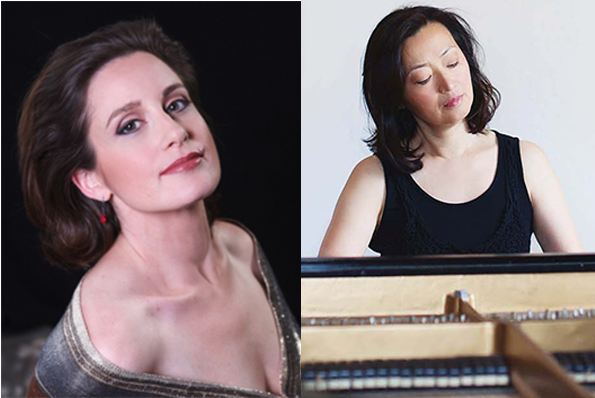 Amelia D’Arcy began her vocal studies at the Baltimore School for the Arts and at age fifteen was a soloist with the Baltimore Symphony Orchestra. Throughout her career she has sung in recitals and concerts with orchestras, chamber ensembles, and opera companies. She has studied at The Juilliard School and Columbia University and has performed at New York’s Central Park Summer Stage, Carnegie Hall’s Weill Recital Hall, the Mendelssohn Choir of Pittsburgh, and with the Pittsburgh Symphony Orchestra. Amelia D’Arcy’s many leading operatic roles include Verdi’s Luis Miller, Puccini’s La Bohème, Verdi’s La Traviata, Puccini’s Turandot, and most recently, Verdi’s Lady Macbeth. New York critics lauded her “compelling vocal quality” and commented that “her voice invariably sounded lithe and alluring.”

Born in Seoul, South Korea, Hyunsoon Whang began her piano studies at the age of four and started playing in public concerts at the age of twelve. Since then she has thrilled audiences in Asia, Canada, Europe, and the United States–including a visit to the Rocky River Chamber Music Society series in 2014. Critics have praised her as “the kind of player who appears to immerse her entire being in the music,” and as one who has “always delivered with grace and beauty.” As an educator, she has nurtured and inspired generations of students, many of whom have received prizes and scholarships. Hyunsoon Whang completed her own education at the North Carolina School of the Arts, the St. Louis Conservatory of Music, and The Juilliard School. She earned a doctorate from Indiana University and has been on the faculty of Cameron University since 1993.

Robert Schumann, Arabeske in C, Op. 18
Richard Strauss, Vier letzte Lieder
Intermission
Charles Ives, Memories: A and B
Samuel Barber, “Sure on this Shining Night,” No. 3
George Gershwin, “But Not For Me,” Girl Crazy
André Previn, “I Can Smell the Sea Air,” A Streetcar Named Desire
Francis Poulenc, Métamorphoses for Voice & Piano: Reine des mouettes, No. 1; C’est ainsi que tu es, No. 2; Paganini, No. 3