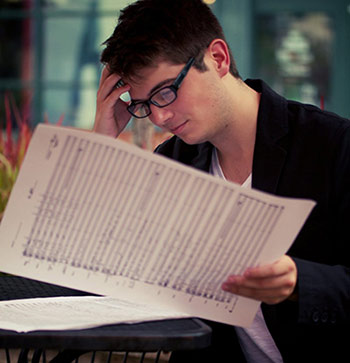 A West Side Story tells the tale of Geoffrey the teddy bear who must find his way back to Lakewood after being left behind at Great Northern. Follow Geoffrey on his adventures as he travels by air, water, and train to return to his owner’s arms. This concert is suitable for ages 3 and up, and there is no admission charge. Share a delightful afternoon with young family and friends–or come by yourself! For more information visit www.rrcms.org, or call 440-333-4296.

Max Mueller is a Los Angeles based composer, pianist, cellist, and educator who grew up in Lakewood, Ohio where he was a member of the world’s first high school rock orchestra, known as The Lakewood Project. Still performing today, this orchestra plays classic rock songs as well as rock versions of classical music pieces.

After moving to Los Angeles in 2007, Max started assisting Academy Award-nominated composer David Newman in the effort to reconstruct older movie scores–such as Out of Africa, How the West Was Won, and Batman–for live performance purposes. In 2011, Max founded Music on the Verge, an organization that designs music opportunities for students to explore the creative side of music through composition and arranging.